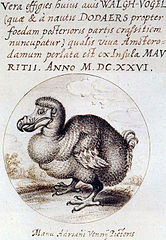 Dodo claimed to be based on a specimen seen by van den Venne in Amsterdam. It is very similar to Roelant Savery’s painting from the same year (1626).

“The Ugly Chickens” by Howard Waldrop was first published in 1980 in Universe 10. I read it in The Legend Book of Science Fiction, edited by Gardner Dozois.

Wow! I loved this one. It was so unusual, and on the periphery of science fiction in my opinion. It is about the search for the last surviving dodo on a farm in America in the 1920s. The dodo was supposed to be extinct in the eighteenth century, and Waldrop writes a story of scientific research, with lots of background material (I have no idea how much of this background is real or made up, but it is entertaining and seems informative).

Waldrop stands out as a writer who has a simple idea and runs with it, however weird and zany the story becomes. And it works.