“The Grove” by Jennifer Foehner Wells was first published in The Alien Chronicles in 2015. I read it in The Future Chronicles – Special Edition.

A lot to summarize, so I won’t try. Enough to say that it is a story about an alien plant who is separate from the mother plant that occupies the planet. She chooses to be alone and wants to get away from the planet. Aliens arrive in a spaceship and she sees an opportunity to get away.

“Trials” by Nicolas Wilson was fist published in 2015 in The Alien Chronicles and I read it in The Future Chronicles – Special Edition.

This is a first contact story and is well done. A single warrior is sent to the most dangerous planet that mankind has yet encountered. If he can persuade the inhabitants to negotiate a treaty it will be a massive morale boost for the mission personnel. But they can’t be negotiated with, and fighting to the death with as many of the inhabitants as it takes to sway the vote is the only way forward.

I really liked this. There isn’t much to say about it except that it was a straightforward linear story, with a beginning, middle and end. Nothing clever, just a good story.

Short story – “What I Intend” by Robert Reed 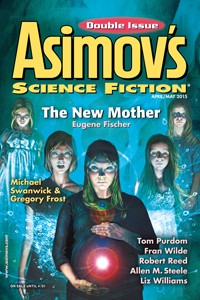 Now this was an old trope presented in an original way. A Steve Jobs type character, a man with loads of money and loads of influence, announces that he is searching for extraterrestrials. People treat him as a madman, but the search has already begun with promising results, and he is expecting to learn about new technology in the messages that are being sent out from far stars. But the reality is quite different.

I liked this story a lot. I don’t think it is the winner of an award, but it deserved to be short-listed. It is a straightforward story, told linearly, from beginning to end. It has a media interview at the beginning and another at the end to frame the story, which worked well, I thought. 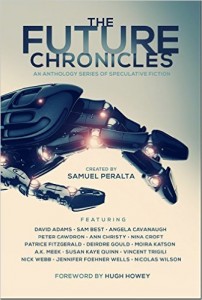 “The Assistant” by Angela Cavanaugh was first published in The Future Chronicles – Special Edition in 2015.

When I started this, I thought, oh no, not another story by a writer writing about a writer. It seemed like a writer’s wish-fulfilment piece. But I forgot for a minute that this was science fiction, and this was just the build-up, and that there would be a turnaround later on. In the end, or about half way through, I found it to be very enjoyable and worthy of a place in this anthology.

It tells of a writer of a tech blog who is persuaded to have an implant in her brain that will act as a personal assistant, like Siri or Google Now or Cortana, but one that knows your thoughts and can take over bodily functions like exercise and eating and grooming so that the writer’s mind will be free to write. See what I mean by a writer’s wish-fulfilment piece, or a wet dream?

Of course, things begin to go wrong. She has nightmares, people seem to know her but she has no recollection of knowing them, and so on.

“Another Orphan” is actually a novella and was first published in The Magazine of Fantasy and Science Fiction in September 1982. I read it in The Collected Kessel. It won the Nebula Award for best novella.

When I started this story I had no idea it was a novella. This is a problem with eBooks — it is difficult to work out how long a story is, so you don’t know what you are letting yourself in for when you begin. I didn’t know that it had won the best novella award, otherwise I would have had a clue as to its length.

I read it in a single sitting — about 90 minutes. It was great. I liked it a lot. Not your typical science fiction story — it does not fit any one genre, as I suppose can be said of much of the best fiction.

The story is about a contemporary man, working in the financial world in the big city, suddenly wakes up in a hammock in a whaling ship. It turns out to be Ahab’s ship, the Pequod, and Fallon is stuck in the novel Moby Dick by Herman Melville. As Fallon knows how the story ends — everyone dies except for Ishmael, the narrator of the book — he tries to persuade the crew that Ahab is mad and that they will all die. He also hopes he might be Ishmael and will survive.

I may have missed out on much of the meaning of the story, some of the nuances, because I have never read Moby Dick.

“PePr, Inc.” by Ann Christy is another story in the collection The Future Chronicles – Special Edition. It was first published in The Robot Chronicles.

It tells the story of a woman who has one of the latest robot companions, custom designed for perfect compatibility. But it is going wrong. She goes to the supplier to complain, but then we get the good old switcheroo, which kind of feels like a cheat. Without reading it again, which I don’t want to do, I can’t be sure, but I don’t think there were any precursors of the change.

This seemed so reminiscent of the Humans TV series, and felt like a cheat of a story. Of course, that is not fair. The story actually goes in a completely different direction. It is an intriguing idea, a perfectly compatible robot, custom designed to be a perfect companion for each customer. There have been plenty of stories written about androids taking the place of humans in society and even becoming partners to human because they are so lifelike and indistinguishable from humans.

If you blinked, you might miss the science fiction in this story. It starts with “true facts” about two characters, Doris, or Dori, a comic book artist, and Lester Bangs, a music reviewer, who die young and lonely. Then, there is a what-if story about the two of them meeting and how their lives developed from there. We follow their lives together into the twenty-first century (the story was written, or at least published, in 1989) until we are reminded at the end that this didn’t really happen, but is what might have been if they had ever met.

A truly interesting story. I struggled with it at first because it was not what I was expecting, but liked it a lot by the end.

Short story – “The Edge of the World” by Michael Swanwick

Another excellent story from a great anthology. There’s only one left, what am I going to do!

“The Edge of the World” by Michael Swanwick was first published in 1989 in Full Spectrum II. I read it in the collection The Legend Book of Science Fiction, edited by Gardner Dozois and published in 1991.

This is a great story about a group of young people living on an alternative Earth which seems to have a piece missing. There is no explanation for why, or I missed it if there is. History, or the famous people and events in it, seem to be fairly consistent with our world and history, but the outcomes are different. We see the action through the eyes of the main protagonist, Donna. She is in love with one of the boys, and is disgusted by the other. They decide one day to take a look over the edge of the world, and climb down a metal staircase into the void…

The world is brilliantly realised, the tension is palpable, the characters are well drawn, the story is well told. This is my first encounter with Swanwick, but it will not be my last.

This was an intriguing story, though not what I would class as science fiction. I like Connie Willis’s writing. It is difficult to understand at times, but is written in such an uncomplicated style that it can seem more straightforward than it is.

It was hard to stop reading it. Quite long, it kept my interest throughout, although I was constantly looking for the science fictional elements. I can say that at the very end there is a hint, but I can’t say more without giving the game away. Impossible to summarize, I think that makes it a perfect short story. Will bear a second and subsequent reading, I think. 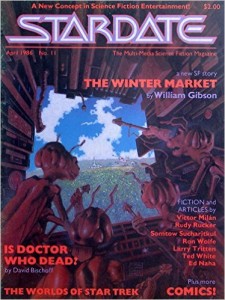 First published in 1986 in Stardate 11. I read it in the collection The Legend Book of Science Fiction, edited by Gardner Dozois and published in 1991.

Another brilliant story, but I would expect nothing less from William Gibson. I am a big fan and have read most of his novels, but not many of his short stories. I think I need to get hold of Burning Chrome, William Gibson’s first collection of short stories.

Tells a story of Casey, an editor of dream experiences (?) who meets a woman with extraordinary dreams who allows him to be the editor. She and he become rich. Can’t say much more. (This is typical of short stories, the best ones can’t be summarized.) “Dreams” is not a correct description, it is a lot more than that. They are edited into products, entertainment products.

The relationship between the two main characters, Casey and Lise, is interesting, because they seem to hate each other at first sight. Casey’s relationship with Rubin, his best friend and an artist, is also interesting. The way the two relationships are kept apart but run concurrently, and intertwined, is a nice way to handle the story structure.