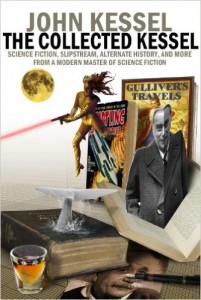 “Another Orphan” is actually a novella and was first published in The Magazine of Fantasy and Science Fiction in September 1982. I read it in The Collected Kessel. It won the Nebula Award for best novella.

When I started this story I had no idea it was a novella. This is a problem with eBooks — it is difficult to work out how long a story is, so you don’t know what you are letting yourself in for when you begin. I didn’t know that it had won the best novella award, otherwise I would have had a clue as to its length.

I read it in a single sitting — about 90 minutes. It was great. I liked it a lot. Not your typical science fiction story — it does not fit any one genre, as I suppose can be said of much of the best fiction.

The story is about a contemporary man, working in the financial world in the big city, suddenly wakes up in a hammock in a whaling ship. It turns out to be Ahab’s ship, the Pequod, and Fallon is stuck in the novel Moby Dick by Herman Melville. As Fallon knows how the story ends — everyone dies except for Ishmael, the narrator of the book — he tries to persuade the crew that Ahab is mad and that they will all die. He also hopes he might be Ishmael and will survive.

I may have missed out on much of the meaning of the story, some of the nuances, because I have never read Moby Dick.

Next post: Short story – “The Assistant” by Angela Cavanaugh